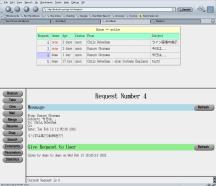 Current Version: 0.14
Reqtool is a pure perl application that both handles email requests and provides a web interface to track, edit and resolve these email requests. It requires no external DB or additional apps other than a web server.

It includes a command line interface which processes incoming emails and a web front-end for dealing with the tickets.
New Feature! Now handles Japanese Characters (and maybe other character sets, but not tested. See image for example

Reqtool was written by Chris Debenham (mail me) and was originally based on the great work by the authors of Reqng which was inturn based on req but contains no code from those original programs in the end.

Thanks go to Remy Evard and other members of the systems group at Northeastern University’s College of Computer Science (http://www.ccs.neu.edu) for thier work on the original req.

This site uses Akismet to reduce spam. Learn how your comment data is processed.